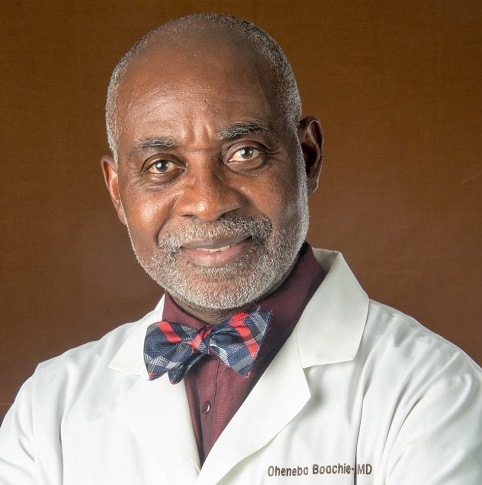 He received his Doctor of Medicine Degree from Columbia University’s College of Physicians and Surgeons in 1980.  In 1986, he was a John H. Moe fellow in spine deformity at the Twin Cities Scoliosis Center and Minnesota Spine Center in Minneapolis, where his teachers included Doctors John Lonstein and Robert Winter.

Dr. Boachie-Adjei is an Emeritus Professor of Orthopaedic Surgery at Weill Cornell Medical College and Chief of the Scoliosis Service at Hospital for Special Surgery (HSS). He is an Emeritus Attending Orthopaedic Surgeon at both HSS and New York-Presbyterian Hospital. As Chief Emeritus of the Scoliosis Service at HSS, he has special expertise in the treatment of scoliosis, kyphosis and spine reconstruction in both adult and pediatric patients.

The Russell Hibbs Award for Best Clinical Research Paper was awarded to him in 1989, 2002 & 2013  by the Scoliosis Research Society (SRS); He was also awarded the Louis Goldstein Award for Best Clinical Poster in 1999 and 2002 and was then presented with the Philip D. Wilson Award For Outstanding Teacher in 1998 by Hospital for Special Surgery, the Distinguished Alumnus Award in 2003 by Brooklyn College, the Humanitarian Award in 2004 by the American Academy of Orthopaedic Surgeons (AAOS), the Albert Schweitzer Science & Peace Gold Medal in 2005 and the Walter P. Blount Service Award in 2006 by the SRS and was featured in the Discovery channel documentary entitled, “Surgery Saved My Life.” He was elected President of the Scoliosis Research Society for the year 2008-2009 and in June 2013; Dr. Boachie-Adjei received the Lifetime Achievement Award from Hospital for Special Surgery. In 2015, He was awarded an honorary doctorate degree by his Alma Mata, Brooklyn College and was featured on CNN’s African Voices documentary as the Ghanaian Doctor transforming Spine Surgery in Ghana and in 2016; the University of Toledo, Ohio inducted him into their Global Medical Mission Hall of Fame. Earlier this year, he was awarded by the Philanthropy Forum Ghana; the Individual Philanthropist of the Year (Special Needs)

Dr. Boachie-Adjei has published and lectured extensively on spine surgery, with special emphasis on surgery to correct spine deformity. He is also an inventor who holds several patents for devices used in spine surgery.